Menu
Log in
Register
You are using an out of date browser. It may not display this or other websites correctly.
You should upgrade or use an alternative browser.

When I create a new recipe, I'd like it to be Private by default rather than having to change the Public default each time I open New Recipe. I do a lot of troubleshooting of recipes & don't want to accidentally save a recipe that should not be public.

I thought the default had been changed to private when opening the "New Recipe" option, but see that is not the case, so I probably misread something somewhere, which lead me to think that had happened.

If you could add the option within The Recipe Settings customization to set the user's default to choose Private instead of Public, as desired by the user, I would greatly appreciate that. .

Thank you for your consideration.
S

It was supported now @Earlene
E

superadmin said:
It was supported now @Earlene
Click to expand...

Thankyou! I really appreciate this.
P

All my recipes have been "private" I just discovered that they are public. Is there a way to change that or should I delete everything?

You can slide the slider over to private in the recipe. And set it in your account to be private as a default.
P

Where in account do I set the default? I'm not finding it.

It's in 'recipe settings". If you go to the far left, under your avatar: 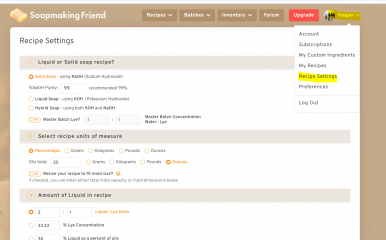 And scroll to the bottom, you can see it: 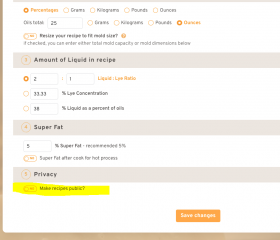 However, I do not see that your recipes are public- where are you seeing that?
I just looked at one, and it's private:

I looked at four recipes- three are private one 1 is public. Maybe the public one was done accidentally, but we didn't change any of them. I didn't check any others.
P

My recipes all say they are private and I have private in my settings but when I do a recipe search they all show up.. My latest was at the top of the bunch in the recipe database.

PaulaG said:
My recipes all say they are private and I have private in my settings but when I do a recipe search they all show up.. My latest was at the top of the bunch in the recipe database.
Click to expand...